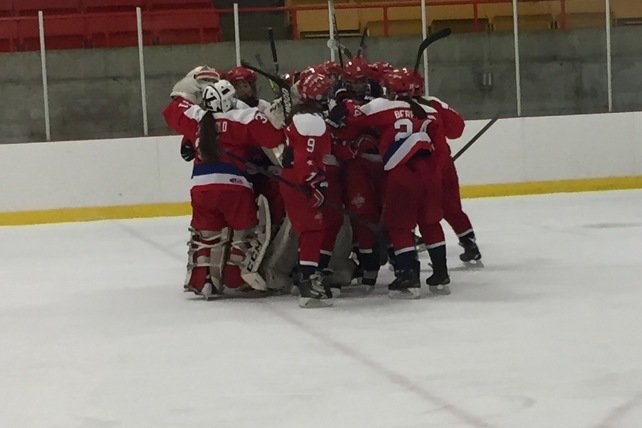 (Dollard-des-Ormeaux, Qc) Le vendredi 15 avril 2016 - The Bantam AA Lac St-Louis Elite girls started the 29th edition of the Dodge Cup on a high note as they came from behind to beat the Laval Rebelles in shootouts.

The two teams faced off early this morning at the DDO Civic Center. Rebelles player #58, Charlie Tessier put one passed the Lac St-Louis goalie with 3:48 left in the first period, giving her team a 1-0 lead heading into the second.

Having faced off against this team before, the Elite knew what to expect and didn't get discouraged. Though they kept shooting and trying to tie up the game, it was the Rebelles who got the second goal of the game, increasing their lead to 2-0. With words of encouragement on the bench, the Elite girls kept fighting. Finally with a minute and a half left in the second, #29, Sydney Guilfoyle passed the puck to her teammate, #21, Emilie Lussier, who found the back of the net making it 2-1.

Going into the third period, head coach Mike Berenson made sure to keep the atmosphere in the room positive, "I told them to just keep momentum and never give up as well as to just keep shooting the puck on the net. If you keep working hard, you never know what's going to happen."

During the third period, the Laval Rebelles were able to hold onto their lead until the last second of play. With 0.03 seconds left on the clock, Lussier came through for her team once again tying it up with a shorthanded goal, thus forcing the game into overtime.

After five minutes of 4 on 4 overtime and no goals, the Laval Rebelles and the Lac St-Louis Elites faced off in a shootout. Jessica Legault and Bianca Fodor were able to help bring home the win for their team while The Rebelles weren't able to get one past the Elite goalie.

According to Lussier, they opened up the tournament with their best game so far.

She believes that it was her teams positive attitude throughout the game that helped them come back to beat the Rebelles.

Looking forward to the rest of the tournament, both Lussier and coach Berenson believe if they keep the same attitude and work hard they can make it to the championship game and take home the provincial title.